We talked about flood insurance at the beginning of the month but since it is a topic we find so important, we are going to talk about it once more! For this week’s blog Roz Binday wanted to share her thoughts.

Some say that Hurricane Sandy which occurred on October 29, 2012 was a 100-year event. Others say close but no cigar. We don’t know for sure, but one thing is:

“Over the span of 30 years, which is the length of many people’s mortgages, there is a one in four chance it is going to happen,” said Mari Tye, a project scientist in the Mesoscale and Microscale Meteorological Laboratory at the National Center for Atmospheric Research in Boulder, Colorado. “Over 100 years, there is a 67 percent chance.”

And that doesn’t take into consideration climate or the effects of El Nino or La Nina, or the rapid temperature change of the ocean.

Moving Target
“That’s why the 100-year event is such a moving target, especially in an urban environment,” said Chuck Watson, Director of Research and Development at Enki Research, which develops tools to measure hazards. “Someone builds a couple of parking lots, and you just turned a 100-year event into a 70-year event because of the impervious surfaces.”

Asphalt doesn’t soak up rain water; it just sends it somewhere else, such as into the house next door. “When you add in natural climate cycles, the results are further skewed”, Watson said from his office in Savannah, Georgia.

One of the influences of El Nino is to send more rain across the southern U.S. In a situation like that, the chances of a catastrophic flood might rise to one in 20.

WHAT’S THE BOTTOM LINE? BE SAFE. PURCHASE FLOOD INSURANCE AND HOPE YOU NEVER NEED IT. But keep in mind, the Federal flood policy has a 30-day waiting period. If you think you can purchase coverage when you hear a storm is coming, it will likely be too late for coverage to attach. Do it now.

If you have any questions or concerns regarding your insurance policy, please feel free to give us a call.  We would be happy to review your current coverage and help to give you peace of mind that your property is protected. 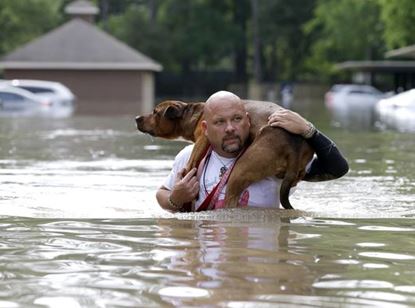 Louis Marquez carries his dog Dallas through floodwaters after rescuing the dog from his flooded apartment April 19, 2016, in Houston. Storms have dumped more than a foot of rain in the Houston area, flooding dozens of neighborhoods.  David J. Phillip, AP